* Please ignore the logos and links. Making a blog page on this site was the easiest way to share our year, and some elements could not be moved.
Happy Holidays from the Sacketts! Scroll down for chronicles and photos of our family from the past year. Or, if you're pressed for time or easily bored, you can just browse the photos and captions, which we promise will not disappoint. Enjoy!
Photo (left, in case it wasn't obvious)

Our annual family photo includes our new backyard, which we actually use! If you haven’t yet heard,  ask us to tell you the story about how we got that fire pit delivered and set up. You will also notice Patrick wearing a tux. No, he didn’t graduate yet. That will happen in June 2019. However, he did dress for his senior portrait, and we think he looks pretty nice. 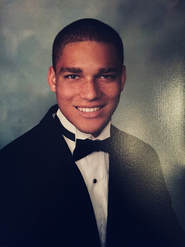 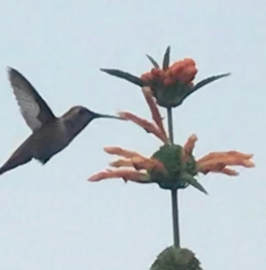 We get more visitors since fixing up the yard
Trips

​Our dream 2018 vacation was scheduled for St. Thomas in July, but since the Virgin Islands were badly damaged by hurricanes, we tried to reschedule (late) for Hawaii, never made it through the wait list, and ended up in Palm Springs. In July. And not even Palm Springs proper, but neighboring Cathedral City. Since expectations were so low, and monsoonal moisture kept the temps down, this short trip was surprisingly amusing. For instance, while walking Cathedral City's sparsely populated streets, we overheard the mayor of Palm Springs—whom we recognized from the local news—complaining about the scandal enveloping him (spying on people in city hall with electronic surveillance) and then say, "Everyone hates me." We should work for TMZ! 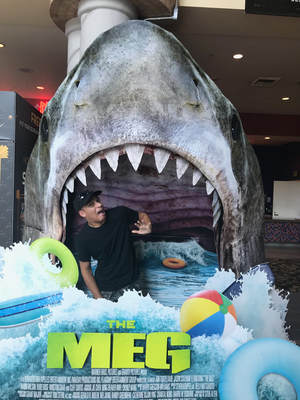 When temps top 100, movies are attractive 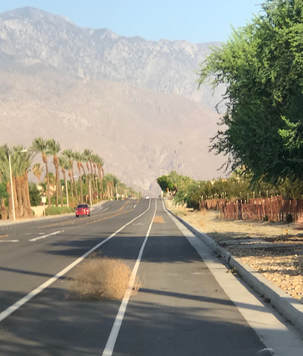 Proof of desert
​Besides this desert getaway, Jason and Karen spent a few days staring at the ocean from classy Terranea Resort in Palos Verdes. 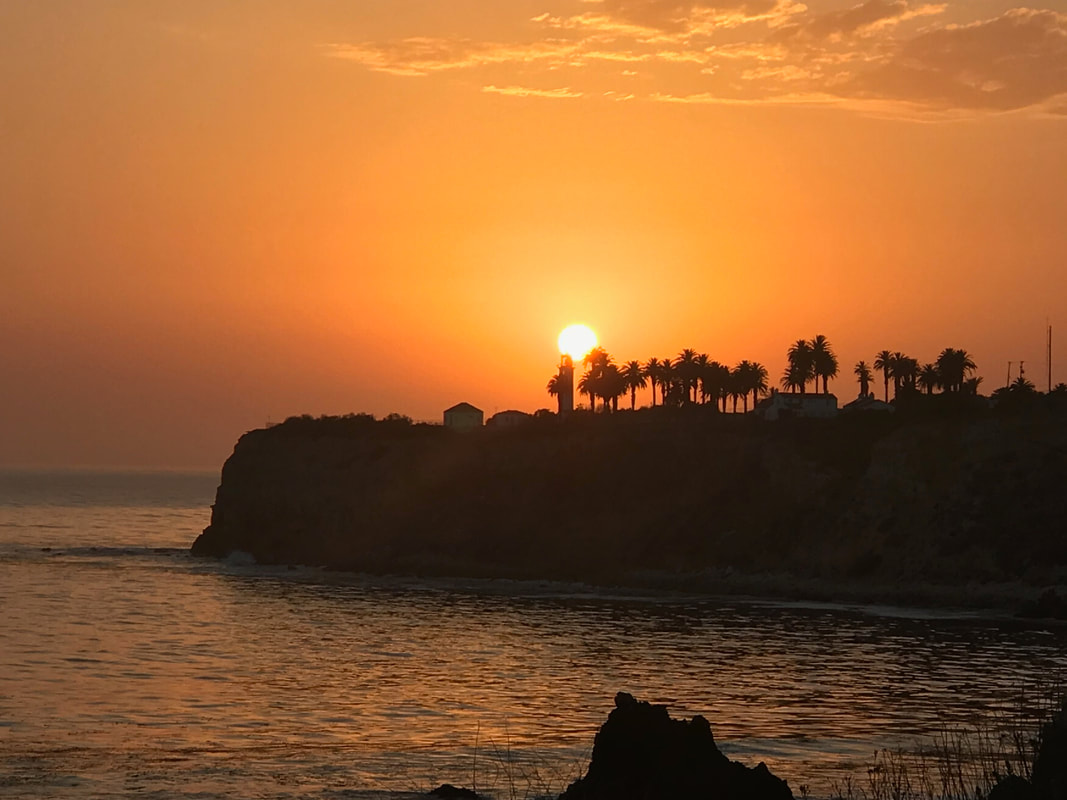 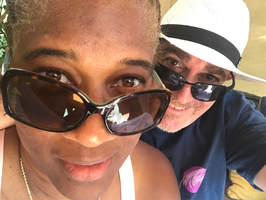 Karen and Jason, staring...
​Jason also took two “business” trips. The first was for a coaching supervision conference in Victoria, Canada, where he maximized his time to include a private sailing cruise to nearby islands, multiple dinners with friends, and sea plane voyages to and from Vancouver Island. Although this trip had many highlights, two stand out: piloting the sailboat’s dinghy full-speed through a calm bay (while barefoot, because the boat leaked icy water that pooled on its floor), and provoking a Canadian waiter to talk trash using most colorful language about big-brand American beer. 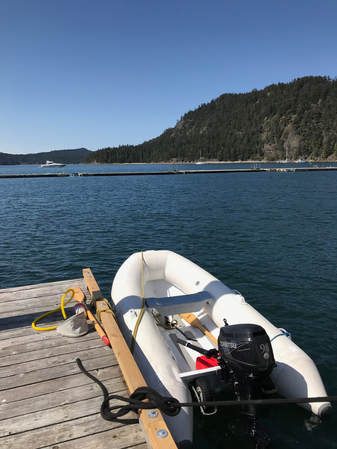 At risk of being pulled over by the Canadian Coast Guard 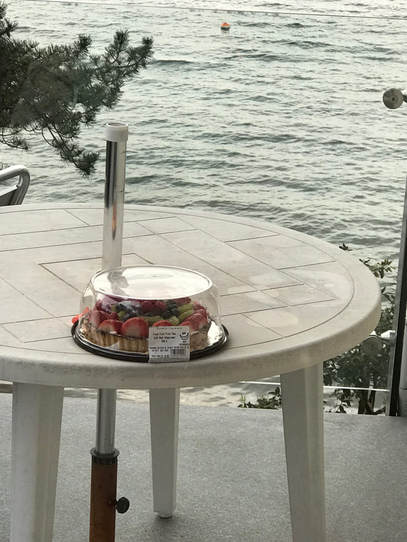 This cake required refrigeration, so we put it outside. Canada is cold. 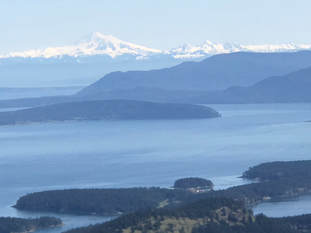 The flight of a lifetime, but not for nervous flyers
​Jason’s second trip was to Austin, Texas, where his buddy Ted invited him to see the USC football Trojans get spanked by the Texas Longhorns, after which he ate away his sorrows with the largest rib in the history of barbecue. 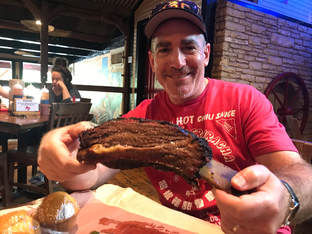 After two years of living on campus at Cal State Northridge, Austin managed to schedule all his classes on Wednesdays and Fridays, then decided to live at home and commute. This allowed Karen and Jason to see that he actually does study, sometimes for hours, like they did when they were college students. This has made them suspicious and mildly concerned that Austin has been cloned and an alien imposter is living with them. Then, he riles up Cupcake at 11 PM, screams “GOOOAL!” at random times (sometimes when no soccer game is on television), comes home with a new pair of shoes every other week, and hits the boxing bag so hard that it dislodges from its professionally mounted hook, reassuring them that the original Austin is still there. 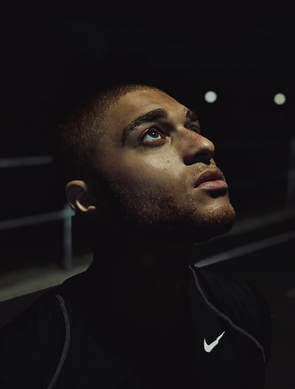 That light in the sky--is that my ride home? 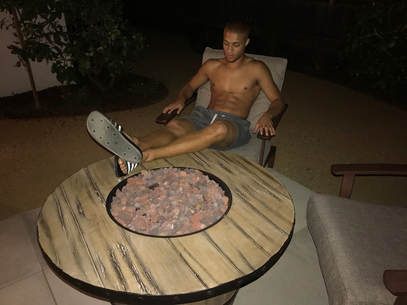 Nope, definitely not an imposter
Patrick

Patrick has quietly grown up and is on the verge of becoming an adult without anyone noticing. While Austin may own the title of World’s Worst Roommate (at least in our house), Patrick may win the prize for the best, and will own that title hands-down once he breaks the habit of leaving a trail of bowls (for cereal and chips). After pouring energy into track and field the past three years, Patrick has dumped that activity for photography, shooting thousands of pics for the school yearbook as well as our featured family holiday photo, which he set up on a tripod with a timer. He has also started hosting “movie night.” With the aid of new power-reclining furniture, a larger T.V., wall-splitting surround sound, and our usual gems from the kitchen, he gathers groups of friends to watch feature films at the Redwood Avenue Dine-In Theater. 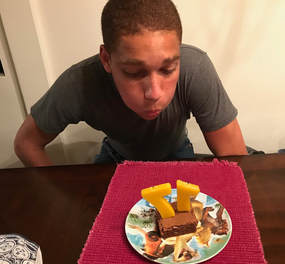 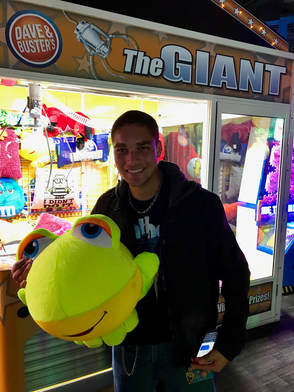 All he does is WIN!
Cupcake

Besides her usual ball/ water/ broom/ insect chasing and mobbing of guests (like cousin Julia, below), Cupcake has been surprisingly civil to the new backyard landscape. She may be smart enough to realize that a fence will appear to block her access at the first sign of foliage assault. 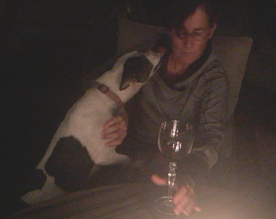 Guests, watch your glass... and your face 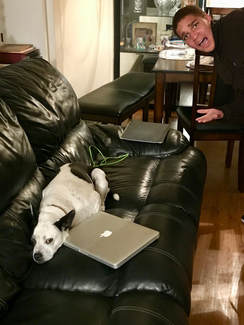 Even when calm, she's disruptive
Jason and Karen, at Work and Play

If they struck you as exercise nuts in years past, they took fitness to a new level of fanaticism in 2018. Karen—who acquired a “Mini Me” for her birthday--added power walking to her already packed schedule of Zumba, cardio line dancing, and pilates. Jason broke his annual record in skating miles before October, and still not satisfied, added a healthy dose of treadmill desk miles at work and nautical miles in the kayak. At the one wedding they attended this year, Karen danced for about four straight hours and made everyone on the dance floor feel like an amateur, especially Jason. 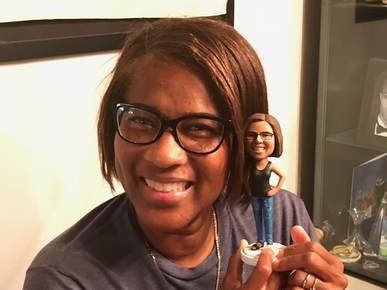 Anytime she needs counsel, she has a wise and trusted advisor 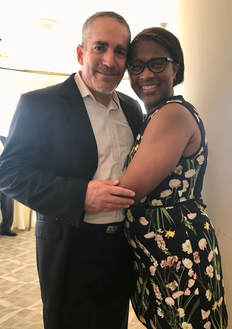 Fresh from the Soul Train line
​Thanks to some great massage therapy and Reiki treatment, Jason regained his ability to fly fish. In 2019, he hopes to regain the ability to catch fish. 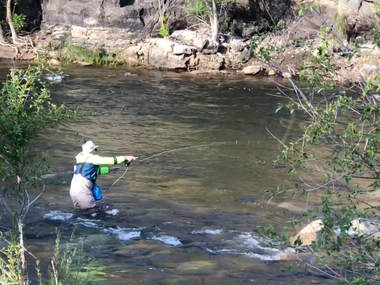 Great form, not so great results
​Karen is half-way through her 17th (or 18th—they're getting fuzzy) year at Hamilton High, and hopes that the district-wide plan for a strike in January is averted. Also at Hami, after fragile egos pushed him out of the football announcer’s booth in 2017, Jason was recruited to rock the mic for an entire game, for which he got to shout “Touchdown, Yankees!” four times, “Give it up for the Hamilton Dance Team!” and  “Snow cones at the snack stand—get 'em before they're gone!” 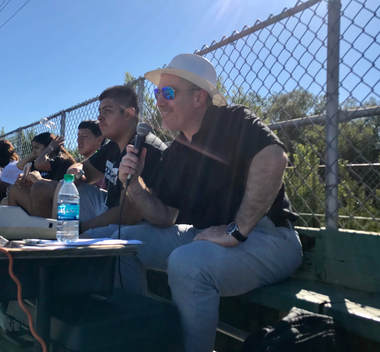 Hoping to avoid calling "Touchdown, Parrots!" for the visitors
Jason was beyond busy at his real job(s), especially the last half of the year, so if you feel like he’s neglecting you, he probably has been. Sometimes the best way to get a spot in his brain is to give him a call or message. Don’t wait too long to do this, because at any time he may start concocting some new scheme (professional, fishing-related, etc.) and be lost to the world again. 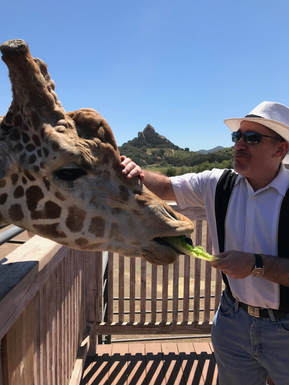 There's a lot of competition for Jason's attention
​We hope your 2018 was more interesting than ours, and that 2019 brings you joy, laughter, and fun. Give us a call, send us a message, or stop by some Friday or Saturday night to hang out by the fire! 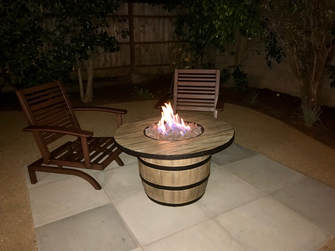 Open seats, just for you. We'll even put in the cushions.